Feature Book and Author: Sins of the Father by Angela Benson 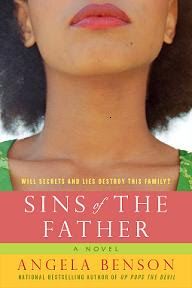 Successful media mogul Abraham Martin has great wealth, an elegant wife, Saralyn, and a rebellious son, Isaac. He also has a secret: a second family that no one knows about. Now, after thirty years—driven by the urging of his long dormant conscience—Abraham is determined to do the right thing by finally bringing his illegitimate children into the light…and into the family fold.
But beautiful, manipulative Saralyn will never accept the proof of her husband’s indiscretions. Isaac the heir, shaken by his father’s revelations, will fight mercilessly when his world is threatened, and may lose everything that matters as a result. And while Abraham’s forgotten daughter Deborah is open to the undreamed-of possibilities suddenly awaiting her, son Michael cannot forgive the man who cruelly abandoned them to near poverty. And he’s driven by only one desire: revenge!

Angela Benson’s Sins of the Father is a powerful story of a house bitterly divided—a rich, multilayered family saga of betrayal and redemption, rage and compassion, faith, forgiveness, and ultimately, of love.

Award-winning author, Angela Benson, has published many works including The Amen Sisters and Up Pops the Devil, published by HarperCollins (Avon A) in August 2008.

Angela's twelfth novel, Sins of the Father (Avon A), hits bookstores in September 2009.
Angela has a diverse education and work history. She majored in mathematics at Spelman College and Industrial Engineering at the Georgia Institute of Technology (Georgia Tech), and worked for fifteen years as an engineer in the telecommunications industry. She holds Masters degrees in operations research and human resources development. Her most recent degree is a doctorate in instructional technology from the University of Georgia. Dr. Benson is now an associate professor of educational technology at The University of Alabama.

Be sure to check back for my review!

For more on Angela Benson, please visit AngelaBenson.com.
Posted by Echelon at 5:30 AM

Welcome to the TPS blog!

The primary purpose of The Pleasing Spoon Blog is to inspire, motivate and encourage people from all walks of life. What originated as a Christian Fiction book blog to assist authors promote their works is evolving into a blog highlighting and showcasing creative-types and their creative works, entrepreneurs and the services they provide, articles, news, information and reviews on an array of products, services and information ranging from books, entertainment, fashion, celebrities, current events and more.

RESPECTFUL DIALOGUE on any and almost everything is welcome here so long as it is presented in a mature, intellectual and thought-provoking demeanor.

Be blessed today and everyday!